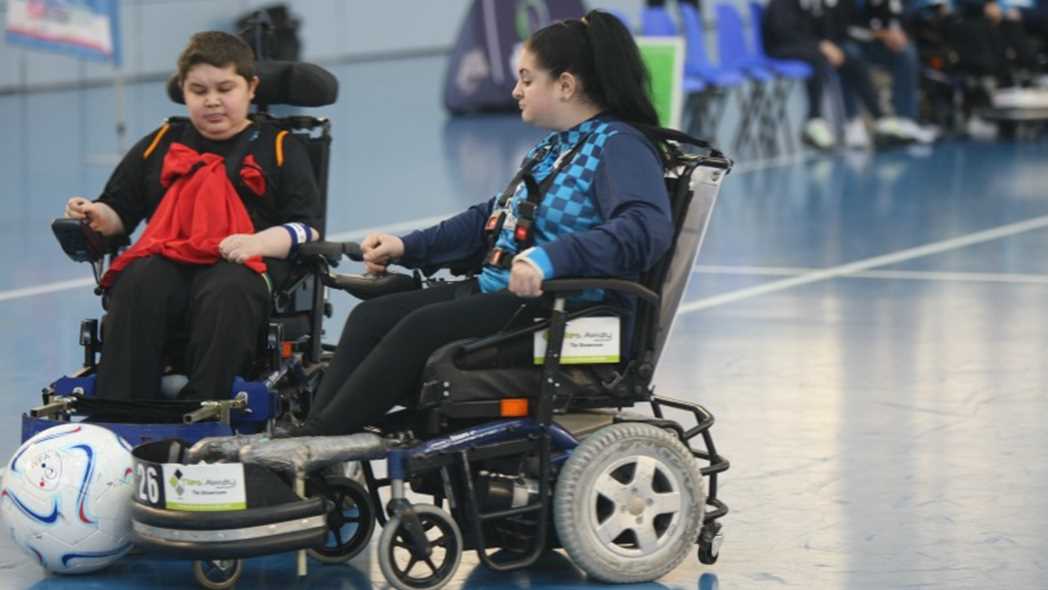 The FA believes that there should be flexible, inclusive and accessible playing opportunities for everyone, whatever their level of ability.

There are now a range of opportunities for players with a disability to access football at various level.

You may be an enthusiastic grassroots player who likes nothing more than a kick about with your friends and enjoys the social aspect of this participation.

As well as mainstream football, there are two main pathways that players with a disability can choose to follow dependent upon what suites them best. Some may choose to play across all three.

We believe that disabled people should be playing in mainstream football. However, we also realise that some disabled people may be better provided for or simply prefer to play in disability specific football, whether that be ‘pan disability’ or impairment specific football. This may be on a temporary or permanent basis but we believe the most important thing to be that there is a choice available.

Most disabled footballers tend to play pan disability football as this format allows players with a broad spectrum of disabilities, impairment and health conditions to play together. Typically the only players excluded from this format will be those who use a wheelchair or those who are blind. See the impairment-specific section below for details of how wheelchair users and blind footballers can get involved.

If you think pan disability football is for you then there are female-specific options available, with a range of mixed gender opportunities.

For some players affiliated football is not an option because of the lack of desire, time commitment, ability, or simply that they don’t want to play competitive football.

Through the Disability Workforce Fund there will be over 100 female-specific ‘Turn Up and Play’ centres and many more mixed gender centres at locations across the country commencing in 2016-17.

These centres will cater for both adults and children and will allow players to play football in an organised but informal way. For more information about centres in your area please contact your local County FA.

There are now nearly 200 affiliated female disability teams that mainly play across the 36 County leagues within England. There are many more mixed teams, particularly at youth age groups where teams tend to be mixed as opposed to single-sex teams.

These teams and leagues form the foundation of the disability player pathway and provide an environment in which players can play competitively on a regular basis. In many cases, these County-based leagues have been established and are supported by County FAs who deliver them in partnership with a range of organisations to ensure that provision is both standardised and sustained.

County leagues develop provision for five key groups who play ‘pan disability’ football – adult male, adult female, U16 mixed U14 mixed and U12 mixed. The format varies, but typically it will be either 5-a-side or 7-a-side with fixtures taking place monthly at a central venue between September and May.

County leagues work with County FAs to ‘sign post’ players that have the ability to participate in mainstream activity to the appropriate playing opportunities, allowing the leagues to focus their efforts on providing opportunities for players whose ‘disability’ prevents them from achieving their potential in mainstream football.

The leagues adopt ‘ability banding’ where there are enough participating teams and clear differences in the ability level of players. (‘Premiership’ competitions are sometimes delivered on a regional basis with ‘Championship’ and ‘League’ divisions being delivered locally via County-based leagues).

Premier League level: Players participating at this level are able to cope physically, have good levels of spatial awareness, excellent ability to understand tactics and good levels of physical strength and fitness.

Championship level: Players participating at this level are mobile, have spatial and tactical awareness, knowledge of the laws of the game and have a good level of fitness.

For more information about teams and leagues in your area please contact your local County FA.

Impairment-specific football means that players with more or less the same impairment play with and against each other. Each impairment group plays a format of football that has been developed or adapted specifically to cater for the players’ needs and there are various forms of classification which exist to try and ensure fair competition.

The FA is committed to ‘Football For All’ and will work with the international impairment-specific sports organisations to try and address this issue in the coming years.

Impairment-specific opportunities for disabled people to play football are not exclusive to these groups. At a local level there are recreational and competitive opportunities for other impairments groups including Downs Syndrome and Mental Health.

Impairment-specific ‘Turn Up and Play’ centres

As outlined previously there are a range of female-specific and mixed gender ‘Turn Up and Play’ centres across the country, which will open in 2016-17, funded by the recently-launched Disability Workforce Fund. The majority of these are pan disability, however a small number will focus on specific impairment groups in partnership with the relevant National Disability Sports Organisation, the Wheelchair Football Association and the English Amputee Football Association. For more information about centres in your area, please contact your local County FA.

A pilot dispensation policy exists, specific to adult disability football competitions, to ensure there are still opportunities for females to play their own impairment-specific format of football, even when there are not enough female players for a single-sex team or competition to be formed. Adult disability competitions such as the impairment-specific leagues outlined above can request special dispensation to allow mixed gender teams as a temporary measure, until the numbers become sufficient to have female specific teams and competitions.