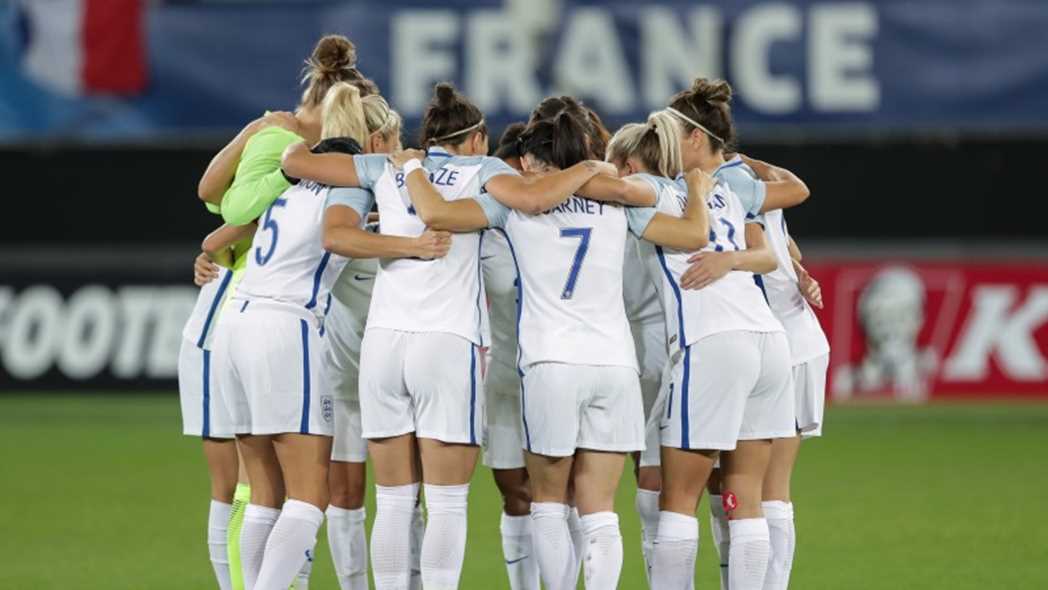 The FA Girls’ England Talent Pathway was put in place to support the identification and development of those with elite potential.

It also ensures that appropriate playing opportunities are in place to enable players to fulfil their developmental needs and reach the ultimate goal of producing elite English female players to compete on the world stage.

Supported by investment from Sport England, each stage of the pathway was specifically designed to ensure appropriate playing opportunities are accessible and inclusive for female players across the country.

While the pathway diagram shows the progression of a footballer from grassroots to the England team, we know that every player’s journey is unique and influenced by a number of factors.

The FA Girls’ England Talent Pathway
All footballers develop at different rates and in different ways in all four-corners of the player’s make-up (technical/tactical, physiological, psychological and social).

Therefore our pathway allows girls to enter at different stages and ensures playing opportunities are appropriate to the needs of the player for them to develop and enjoy playing football.

National Performance Camps (NPC) have been put in place to support U14 players identified as having ‘international’ potential.

NPCs provide players with the opportunity to train and play among high-level players from around the country. With guidance and support from FA technical staff, players are also given access to specialist medical and sports science support to further aid their development.

NPCs are residential camps held five times a year at a central venue. Players are selected on a camp-by-camp basis and involvement with one NPC does not guarantee involvement at the next or subsequent national performance level.

Selection is by recommendation either from The FA regional talent technical coaches, the RTC/ACC or an FA talent ID reporter. Players do not have to be registered at a Regional Talent Club or Advanced Coaching Centre to be selected.

Regional Development Programmes (RDPs) offer selected players the opportunity to further develop and train alongside like-minded and talented players within their region.

They are organised by The FA with each programme consisting of a number of development camps and performance hubs that provide a support mechanism to cater for the individual’s needs; giving clarity across the technical, tactical, physiological and psychological remits.

RDPs have been uniquely tailored in each of the seven regions to meet the needs and demands of the area.

Selection is made by the regional talent technical coaches, with specific camps and hubs aimed at different ages and levels of experience. Players do not have to be registered at a Regional Talent Club or Advanced Coaching Centre to be selected.

A Regional Talent Club (RTC) is an enhanced coaching centre for U10, U12, U14 and U16 age groups, and allows players identified as having elite potential the opportunity to access appropriate levels of coaching and support.

Thirty-four RTCs are spread across the country (excluding those regions where Advanced Coaching Centres are run). Players registered with an RTC cannot be signed to any other club.

They are managed by local organisations who facilitate the administration and running of the RTC. A minimum of three-hours training are provided per week to each age group, and all players take part in a fixture programme.

Access to the RTC is gained through a trial process held in June; players can be nominated for trials by their teacher, grassroots coach or they can apply directly to the club.

U10 and U12 age groups participate in a local Charter Standard youth league and play fixtures arranged by the league. U14 and U16 age groups play in an FA organised fixture programme, although only U16s play competitive fixtures, and take part in The FA Girls’ U16 Youth Cup.

The new three-tier Regional Talent Club programme was launched for the 2016-17 season to provide greater support to the clubs working with our most talented players. It operates across a tiered concept as opposed to a ‘one size fits all’ model, in which the elements of funding and delivery are different across the three tiers that clubs have been awarded.

The purpose of the tiers is to reflect where clubs are in terms of their individual growth and infrastructure.

The opportunities to attend a Regional Development Programme/National Performance Camp/England Camp are the same for a player if she were to attend a tier 1, 2 or 3 Regional Talent Club.

The FA Girls’ Advanced Coaching Centres (ACC) are part of a specifically designed programme to support the development and progression of players in the south west and east of England. Due to the geographical challenges and limited playing opportunities in the east and south west, the pathway has been adapted in these specific regions to ensure it is accessible as well as supportive and educational.

Players are permitted to remain in grassroots club football and participate in a grassroots fixture programme, but ACCs will then provide supplementary support for selected players with an additional night’s training a week and a minimum of six fixtures a season against other ACCs or Charter Standard Youth teams. This pathway ensures that the players’ development, health and well-being is at the forefront of the programme.

ACCs are licensed to the local County FA who facilitate the organisation of the Centre and appoint appropriately qualified coaches for each age group.

Each County FA will operate an ACC for a minimum of 29 weeks starting in September of each season, and caters for U12s, U14s and U16s.

Access to the ACC is gained through a trial process held in July; players can be nominated for trials by their teacher or grassroots coach, or players can apply directly to the Centre.

The FA have partnered with Ipswich Town FC to run an U21s East Region Academy (starting in 2017-18 season), which provides our top-end players in the area the support required to play at a high level post 16, with a dual career linked with education.

Research shows that players in the east region had limited elite football options available to them post 16, and as a result players were leaving the game, playing at a much lower level (impacting their development and international status) or leaving home to fulfil their football aspirations.

The Academy not only provides holistic support to these girls who have the ability to play at the highest domestic level, but provides a structure and culture so players understand the importance of a dual career and how to embed both football and education in their lives.

Players train twice a week and all day on a Wednesday with a fixture programme scheduled for weekends.

The holistic training programme is delivered by specialists across the disciplines and individual player development processes are set to support the players both on and off the pitch. Players are selected on a trial basis.

A Player Development Centre (PDC) is operated in the Cumbria region to ensure provision is available to talented players living in the area, many who would not be within the 90 minutes travel time of reaching their closest RTC.

This provision will be run by the County FA and is accessible to U10, U12 and U14 age groups. Cumbria PDCs provide training and fixture opportunities for talented players across the region.