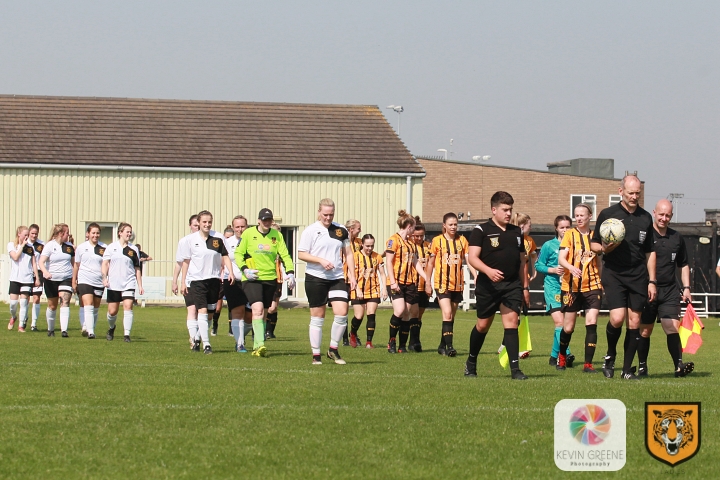 The Tigresses succumbed to a 6-2 defeat in the FA Women’s National League Cup opening round away to Norton & Stockton Ancients in the sweltering heat.

The Tigresses began the game with renewed confidence by opening the match with some intricate play with Helen Lynskey and Emily Smith who were particularly instrumental.

With the Tigresses beginning the game with renewed composure; their defence was under siege minutes into the match when Norton sent out some warning signs.

Bianca Owens chipped pass over the Hull defence was latched onto by Nyci Thorns but her strike was thwarted by Sharla Cone.

The resulting corner, however, capitalised on a lack of concentration from The Tigresses when an unmarked Victoria Burton headed Norton into an early lead.

Hull responded, however, through Jo Symmington and were unfortunate not to equalise.

Rachael Ackroyd threaded the ball through to Symmington in the area, but Rachel Chisnall in the Norton goal was equal to her fierce strike.

Hull continued to provide efforts on goal midway through the first half and enjoyed the majority of the opportunities. Emily Smith came close to levelling the scores, but her curling effort from range just evaded the target.

With the Tigresses unable to capitalise on their opportunities, they were dealt a blow on the 38th minute when Norton doubled their advantage.

A searching ball over the top by Sophie Tierney found the run of Shannon Reed from the left; she cut inside and unleashed a low drive that just evaded Cone.

The half ended with Norton grabbing a third; a persistent Maddy Atkinson dispossessed Suey Smith deep in her own half before teeing up Nyci Thorns, she calmly dispatched her effort underneath Cone.

The Tigresses began the second half with a point to prove and asked questions of the Norton back line through the willing Rachael Ackroyd.

Their early second half efforts were rewarded when a long punt over the Norton defence was latched upon by Ackroyd.

She beat Burton for pace before finding the bottom left corner with a composed finish.

Norton reacted shortly after to grab their fourth. Shannon Reed skipped past Suey Smith on the right before teeing up Maddy Atkinson. Her first time, looping effort sailed over Cone.

Norton compounded the Tigresses misery in the 64th minute through a second from Thorns.

Bianca Owens held off the presence of Amy Wilson before finding the run of Thorns; she eased her way through the Tigresses defence and slid the ball past Cone.

Hull responded through Ackroyd; Wilson clipped a ball into her midriff, she brought it down well, but her promising half-volleyed attempt was blocked

With the Tigresses committing bodies forward in an attempt to close the deficit, they were very nearly punished for some poor defensive work.

Amy Wilson failed to shepherd the ball out of play and was robbed by the tenacious work of Libby Waller; she lent it to Owens, but her powerful drive was brilliantly saved by Cone.

In the 80th minute, however, the Tigresses were rewarded with a consolation through Emily Smith’s persistent work.

The in-form winger picked the pockets of Kate McGuire, took it past Chisnall before finishing with ease.

Hull were then dealt another blow when Sharla Cone was dismissed after handling outside the area.

Owens was slotted through by Tierney, however, her goal-bound strike was instinctively blocked by the arm of Cone.

Hull could have reduced the deficit once more when a deflection off Ellie Tanser inadvertently sent through Ackroyd, however, her effort was to no avail

After enduring cup disappointment in the sun, The Tigresses will hope to build on the positives from this display when they take on Derby County Ladies in the FA Women’s National League on September 1st.