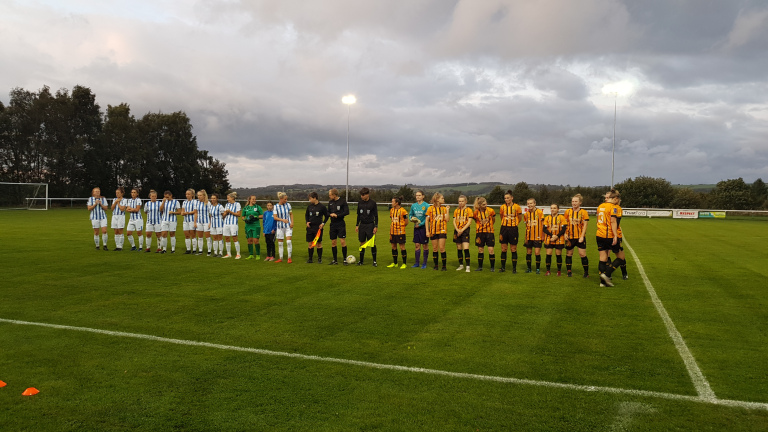 The Tigresses suffered a 6-2 defeat against a well organised Huddersfield Town Ladies side, however, the Tigresses kept on fighting till the very end and manager Rachel Gay praised the teams attitude after the game.

Defeat for the Tigresses meant they succumbed to their third defeat on the bounce, whilst the home side made it three unbeaten; drawing to Fylde 2-2 before putting Loughborough Foxes to the sword in a 6-0 hammering.

Hull City Ladies where without their instrumental captain Jo Symmington which gave experienced counter-part Helen Lynskey an opportunity to adorn the captains armband.

Despite playing against opposition who are expected to be challenging in the upper echelons of the division, the Tigresses began the game on the front foot.

A minute in, Emily Smith sprung through the Town back line but her effort trickled agonisingly wide of the margin.

Despite making a bright start, the Tigresses were dealt a warning sign when a cross from the right met the on-rushing Lucy Sowerby, but she could only divert her headed attempt over Lacey’s goal.

Sowerby proved to be in the thick of the action and she opened the scoring in the 10th minute; a cross from the right picked her out and in acres of space, she dispatched her first-time effort beyond Jasmine Lacey.

The Tigresses failed to react to this set-back and Sowerby grabbed her second in the 14th minute.

A poor goal kick from Lacey was pounced upon by Town; Jackman mistimed her defensive header and Sowerby confidently struck on the half-volley and beneath an outstretched Lacey.

Huddersfield were in the ascendancy and very nearly killed the game off but for some inspired Tigresses defending.

First Lacey pulled off an impressive acrobatic save to deny Mallin, before Jackman was alert to the danger to block Mallin’s effort off the line.

The Tigresses continued to battle back, however, for all their dogged determination were unable to create a clear-cut opportunity and on the stroke of half-time, Town grabbed their third.

After being denied twice by the Tigresses, Kate Mallin ensured she wasn’t going to be beaten and hit a thunderous strike with anger that flew past Lacey.

Katie Thompson was cut a frustrated figure to be left on the bench, however, she was brought on at half-time and made an instant impact.

The Tigresses played some delightful football in the centre of the park with the ball eventually finding Ackroyd; she clipped a wonderful first time ball over the top to find Thompson who remained composed to lift the ball over the Town keeper.

After scoring, though, the Tigresses tend to switch off and were caught unaware from a corner to allow Huddersfield to reaffirm their grip on the game.

A corner from the left was flicked on at the front post and wasn’t dealt with; this allowed an unmarked Charlotte Newsham to power home a header that evaded Lacey.

The Tigresses almost found themselves four goals down but for some acrobatics; the recently introduced Ellie White very nearly made the instant impact, she hit a dipping strike from range that reduced Lacey to a wonderful save at full-stretch.

Town grabbed their fifth when they capitalised on poor defensive play; a cross came in from the right and with players queuing up, Danby slammed home.

In the 84th minute, Huddersfield completed their scoring through substitute Ellie White. She hit a ferocious strike at Lacey’s near post to rub salt in the Tigresses wounds.

With the Tigresses fighting till the very end, their determination and willingness to keep plugging away was rewarded on the stroke of full time when Thompson notched her brace.

The Tigresses sprung forward with numbers; Dodsworth played a one-two with Smith, with the latter delivering a teasing cross that found Thompson lurking. She delicately chipped past the Town keeper to grab the Tigresses a well deserved consolation.

A 6-2 score line is one that sounds damaging, but the Tigresses didn’t let that get to them and carried on battling away till the very end.

Stand-in captain Helen Lynskey put in a superb display, whilst 16-year-old Florence Pegrum continued to impress at left back by putting in a professional display that was well beyond her years.

After scoring a brace off the bench, Katie Thompson will be keen to ensure that she doesn’t lose her starting place in the future.

The Tigresses now face a tough test when they travel to third placed Sunderland, whilst Huddersfield host Stoke City ladies in what looks to be an intriguing affair.