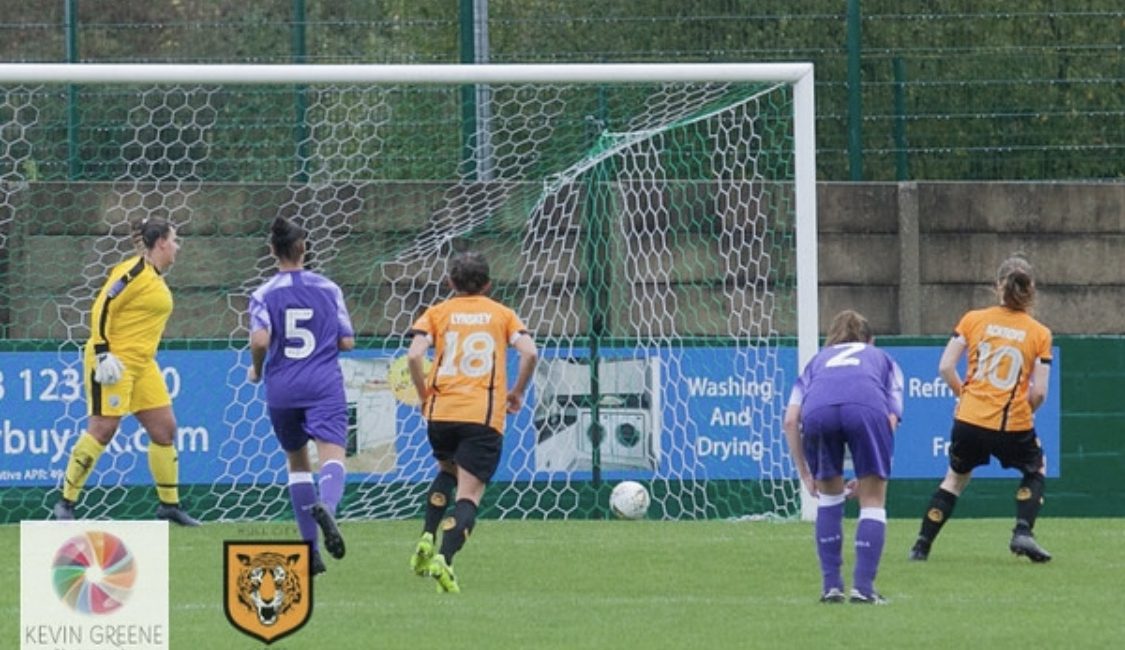 The Tigresses started the livelier of the two outfits and created the majority of the opportunities in the opening 45 minutes, however, they were fortunately not made to rue their attempts at hammering home their dominance.

City hit the woodwork inside the first 8 minutes of play. The Tigresses pressed in numbers to reclaim possession and the ball dropped invitingly for Helen Lynskey; she struck a speculative left footed half-volleyed attempt that cannoned off the crossbar.

The Tigresses had joy in wide areas and this was epitomised through Katie Thompson; she was found by Ellice Jackman’s accurate cross-field pass. Thompson blitzed past Hannah George and crossed for Ackroyd, though her header was comfortably saved it served as warning sign for the visitors.

Ackroyd was to be denied later on by the frame of Vanessa Kinnerley. Amy Wilson’s calculated long ball into the channel was latched onto by Ackroyd, her strike produced a fine stop by the midriff of the West Brom goalkeeper.

After the Tigresses pushed for the opening goal, the visitors very nearly punished a defensive mishap with their first attempt.

A mix up in communication between Jackman and Sharla Cone ended with the latter clearing only as far as Keeley Davies, however, her goal bound effort was diverted behind by Amy Wilson.

It was this scare on 40 minutes that kicked the Tigresses back into gear, they were awarded a penalty on the stroke of half time after Alice Hughes slid through Emily Smith, she was hacked down in the area.

Rachael Ackroyd stepped up and made no mistake in convincingly dispatching her penalty into the right corner.

The first half ended with the Tigresses in front, it was a scrappy encounter but the home side were very good value for their lead after putting in a Tigerish first half display.

After a dire first half display from a West Brom perspective, they came out of the interval eager to find the back of the net more. The Tigresses pressed in unison in the first half, but as bodies tired this press became more stagnated and West Brom began to push for an equaliser.

The visitors forced The Tigresses into immediate second half action, a throw-in from the left found Evie Gallop, she cut inside of Oxley and caught her strike well, however, Sharla Cone stood firm to produce a terrific diving save.

When the Tigresses were presented with the opportunity to attack, they took it and both full backs certainly personified that intent. Jo Symmington showed tenacity to win back possession and carried on her purposeful run before clipping a ball to the back post which just evaded the path of Thompson.

A one goal cushion is difficult to preserve and West Brom made their second half superiority count after capitalising on a Tigresses defensive mistake on the hour mark.

A miss kick from Sharla Cone put the midfield in trouble, they gifted possession to the away side and Amy Wilson was unable to clear; Jade Arber profited on this mistake and her left footed effort frustratingly trickled into the right corner.

When the Tigresses concede they usually let their heads drop and on this occasion, they were fortunate not to find themselves fall behind.

A dangerously whipped in corner was met by the head of Jackman, her clearance dropped to Keeley Davies on the edge. She took a touch before unleashing a strike that allowed Cone to pull out the acrobatics to deny the visitors.

With the game hanging in the balance, tempers flared up and in the 73rd minute Trina Greaves was shown a straight red card in an incident which saw Greaves target the referee with abusive language.

The Tigresses almost made their extra man advantage count instantaneously; Lynskey’s through ball punished West Brom’s high back line. Ackroyd was spoilt for choice and unselfishly tried to square the ball to Thompson, but Fran Orthodoxou came to the visitors rescue when her interception denied a certain goal.

In the 82nd minute, the Tigresses were awarded a second penalty of the game, Ellie Tanser’s calculated ball over the visitors defence found Helen Lynskey lurking in the area, she was hacked down by Orthodoxou who was shown a straight red card.

Rachael Ackroyd created a carbon copy of her first half penalty by slotting down the right to edge City back in front.

Just prior to that, Rachael Ackroyd went through one-on-one after Nicole Nymden and Orthodoxou were unable to cut out Lynskey’s through ball. Ackroyd struck well but the foot of post denied her from registering in open play.

Though West Brom were reduced to 9 men, they were inches away from finding an equaliser with a minutes to go.

Keeley Davies found a burst of energy and took matters into her own hands, she pierced through City’s midfield before hitting a ferocious effort from 30 yards that cannoned off the upright.

This late scare proved to be the final action in an ‘action packed’ 90 minutes. The Tigresses had a real reason to celebrate, they ended 2-1 victors to claim their first points of the season at the seventh time of asking.