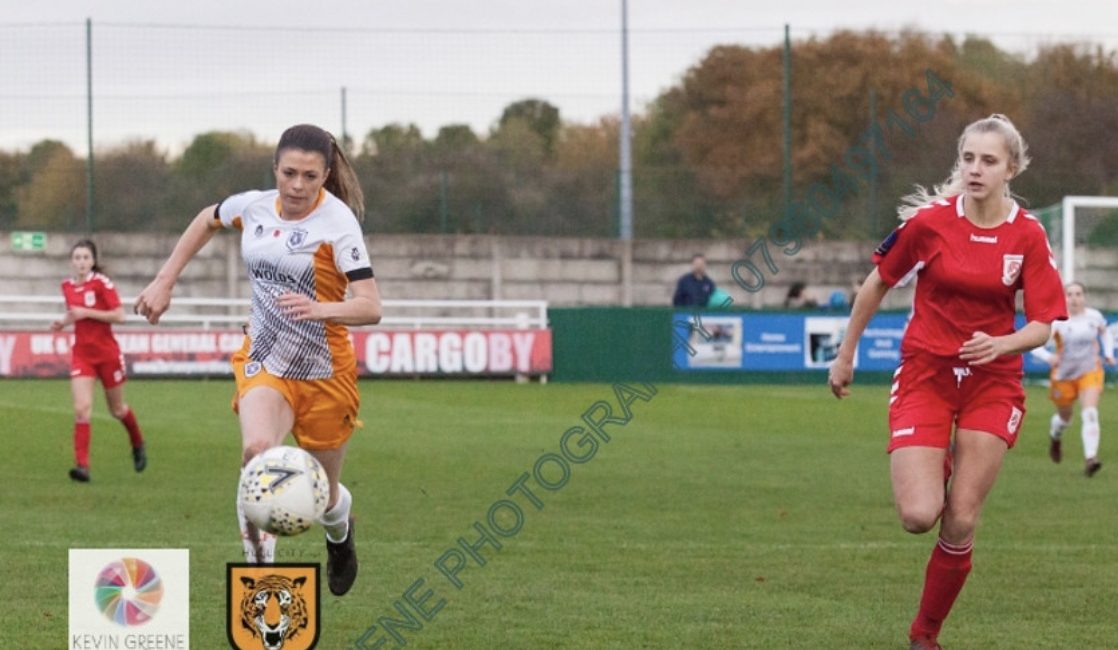 In an action packed afternoon at the Dransfield stadium with a family fun day on offer for children and a big crowd in attendance, those that turned up were treat to an entertaining 90 minutes of compelling, footballing action.

Hull City Ladies, though willing to grasp victory, were beaten 6-3 by Middlesbrough
Women in a potential relegation six pointer.

First half goals from Tyler Dodds, Emma Brown and Eleanor Dale were cancelled out by two Tigresses strikes with Katie Thompson and Helen Lynskey replying.

Middlesbrough took the game away from the Tigresses with three goals in 8 second half minutes, before Boro scored an own goal to provide City with a deserved consolation.

The game began with a fast-paced tempo and the Tigresses failed to take advantage of an overload down the flanks in the opening exchanges.

City registered the first chance of the game just two minutes in; Ackroyd held off her marker before through-balling to Emily Smith, she had the presence of mind to cut back for Ackroyd who could only slice her effort wide of the post.

A key game plan from the Tigresses was to press high and try to stop their midfield from releasing their dangerous forward players. However, in the 6th minute, Middlesbrough beat the press to open the scoring.

Emily Scarr had the beating of Tillie Oxley down the left, she flashed a ball across the box that missed the intended target of Eleanor Dale, but Tyler Dodds was on hand to neatly side foot beyond Megan Cooke.

After conceding a disappointing goal, the Tigresses responded from the restart in fine fashion.

Katie Thompson latched onto a calculated long ball from Tillie Oxley; she rode a few Boro challenges before unleashing a beautifully curled effort with her weaker left to put City back on terms.

The game continued to deliver nail-biting, end-to-end action with both sides having the chances to edge their way in front.

But it was Boro who threatened the Tigress rearguard frequently, their likely avenue for goals was exploiting deficiencies down City’s left side.

Jasmine McQuade released the lively Dodds down the right, she pulled the ball back for Scarr who side footed her effort over the bar.

This chance proved to be a warning sign for what was to come, the away side hammered home
their superiority by grabbing their second in the 20th minute.

Hannah Luke’s calculated long ball sailed over a despondent City back line, Megan Cooke hesitated to come off her line with Dale capitalising on this indecision with an exquisite lob.

Middlesbrough then doubled their lead on the half hour mark through Emma Brown.
The Tigresses failed to clear a Boro corner and McQuade latched onto a loose ball in the area, she sold two players with a dummy before clipping a dangerous cross into the centre of the box.

This was met by a rising Emma Brown who saw her header clip the cross bar and bounce over the line.

With the Tigresses in dangerous losing territory, there was a strong reaction from the home side
and they managed to reduce the deficit in the 36th minute.
The Tigresses put together a fine passage of play after Katie Thompson’s desire to win the ball
back opened up an opportunity. Thompson squared the ball inside to Emily Smith, her clever
dummy deceived her marker before Lynskey fired a superb left footed strike into the top right
corner.

In the opening exchanges after the interval, City kept up sustained pressure in the Boro half
without being able to create a clear cut opportunity.
City had the games first shot on goal in the second half, Katie Thompson’s Ronaldo-esque free
kick dipped just in front of Wareham, but she quickly pounced on the ball at the second time of
asking.

After beginning the second half with a better shape and looking dangerous in the attack, the
Tigresses were undone in unfortunate fashion.

Ellie Tanser was particularly influential in winning tackles in the middle, however, her strong
challenge this time ricocheted into the path of Emily Scarr. She ruthlessly rifled into the top right
corner with Megan Cooke unmoved.

Middlesbrough added a fifth in the 56th minute when they split through the Tigresses. Emma
Foster’s well-weighted through ball set Tyler Dodds through, she remained composed enough
to slide past Cooke.

In a remarkable 8 minute defensive lapse from the Tigresses, Boro added their sixth after the
hour mark to take full advantage.

Eleanor Dale sprung the offside trap and calmly slotted beyond an on-rushing Megan Cooke to
complete her brace.

After conceding the sixth, the Tigresses grabbed their third almost instantaneously.

Katie Thompson played a clever one-two with Emily Smith with the latter crossing low into the
box, an unfortunate Watt could only turn into her own net to make it 6-3.

Substitutes Harley Skinner and Florence Pegrum adjusted to the game well when they were
introduced, they added a much needed spark down the City left side.

The lively Harley Skinner was unfortunate not to see her cross-cum-shot sail into the far right
corner after she did superbly down the left to fashion an opportunity.

In the 85th minute the Tigresses had a strong penalty shout turned down. Jo Symmington set
off on a solo run into the area before she was tackled by Foster. The Boro player was adjudged
to have handled whilst on the ground.

Symmington quickly got back to her feet to reduce Wareham to a brilliant point back save before
Boro cleared the opportunity of a rebound.

This proved to be the final action in a 90 minutes worthy of a great advert for Women’s football
at this level. The Tigresses fell to another defeat, but there were many positives to take from this
performance and it certainly lifted the lid on a successful day all round.
Lineup: Cooke, Oxley, Wilson ➝ Pegrum (58’), Jackman, Symmington, Hughes ➝ Frederiksen
(74’) Tanser, Lynskey, Smith, Thompson, Ackroyd ➝ Skinner (58’)