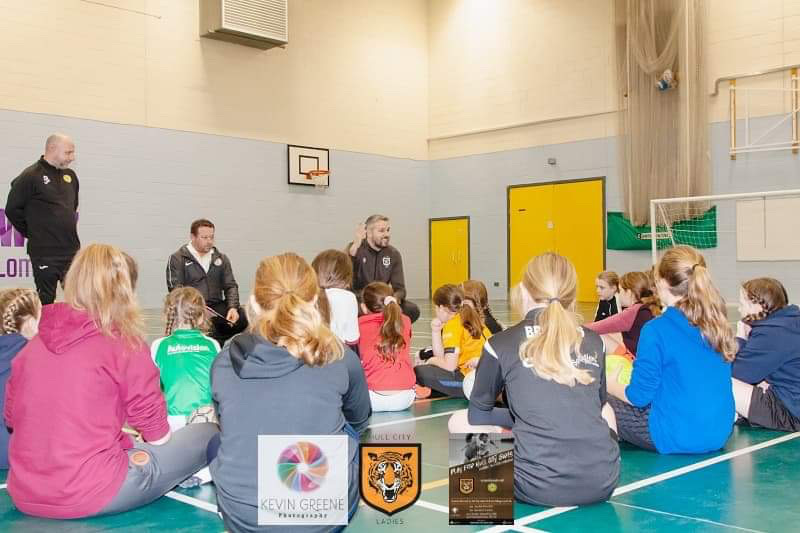 The Future Growth of Girl’s Football

Whilst the excitement surrounding women’s football continues to grow, there is an increasing demand for Futsal in the region and across the UK. Futsal is a five a side game which includes a goalkeeper on each side, with a smaller pitch, historically played indoors and a slightly different ball. The smaller nature of the pitch means that it is desired for players to have much better close control and technique on the ball.

Historical facts in the game of ‘Futsal’

Hull City Ladies & East Riding Futsal Club have combined the two by offering girls opportunities to develop their skills in the Thursday night sessions taken by experienced and qualified coaches. Girls of all ages are encouraged to attend with the end goal leading to an opportunity to play for Hull City Girls.

With aspirations to improve the level of Futsal by attending these extra curricular activities, the game is also being enhanced in schools where the contact time between player and coach is increasing. Further opportunities are being provided to children from earlier ages with the School’s Programme offering a child centred approach to keep children invested in sport through to their adulthood. School Futsal Tournaments take place once every term using the facilities provided by a local secondary school. Winners from the local primary schools will go on to compete in the Annual City and the Regional School Futsal Tournaments.

Joe Coates is the Youth & Sports co-ordinator at Hull City Ladies, he spoke to the club about his role and plans to increase the number of young girls who participate in sports, he said:

“My role at the club is a youth & schools co-ordinator, it’s our aim to work with schools, allow contact time for girls and boys. We primarily set our focus on trying to create a platform that will get girls into the sport, whilst keeping them engaged.”

“The short term plans are to allow the contact time to increase, to create a pathway for girls to get involved in football. So far we’ve begun that pathway through the futsal set up, personally travelling into the schools with coaches, offering after school clubs which allows girls to participate in sport and keeping them active.”

In the future the club intends on implementing an Elite Girl’s Programme which is an enhanced coaching centre where identified players with elite potential are able to access the appropriate levels of coaching and support. The implications of this programme at Hull City Ladies Football Club is to offer a platform for young, talented girls to develop and enhance their skills so when their chance arrives in the first team, they are accustomed to the standard of football required.

General Manager/Coach Danny Johnson spoke to the club about the progression of Girl’s Football, he said:

“When players come to us at 16 and working their way into senior football, it’s the likelihood that girl’s haven’t had as much contact time as we’d like, therefore we are trying to support grassroots teams, increase contact time and keeping them playing at their clubs with the scope of developing an academy set up later in the year.”

“This idea will be based along the lines of an RTC, looking at their model of how they operate and at Hull City Ladies we will be taking that model, whilst running an academy set up for those girls who want to be a part of our elite academy. We’re currently in the planning stages and this will come into fruition this year.

“We’re very excited and confident that this will be a great success, as we’ve had a lot of demand from both parents and children across the region. This is because quite a few of the talented players in this area are travelling to the likes of York and other out of city RTC’s. It is therefore our responsibility to identify and provide the opportunity for girls to play football at the highest level.”

The foundations are in place for Hull City Ladies to continue the progression of girl’s football and create an elite academy set up. At the club there are two UEFA A-License coaches; First Team Manager Adrian Costello and player coach Suey Smith. Danny Johnson boasts a B-License in coaching, whilst there are also aspiring professional coaches who are furthering their development at the club. Although the coaching staff hold the responsibility of inspiring the next generation of children, the players also act as role models for young girls aspiring to become a professional footballer.