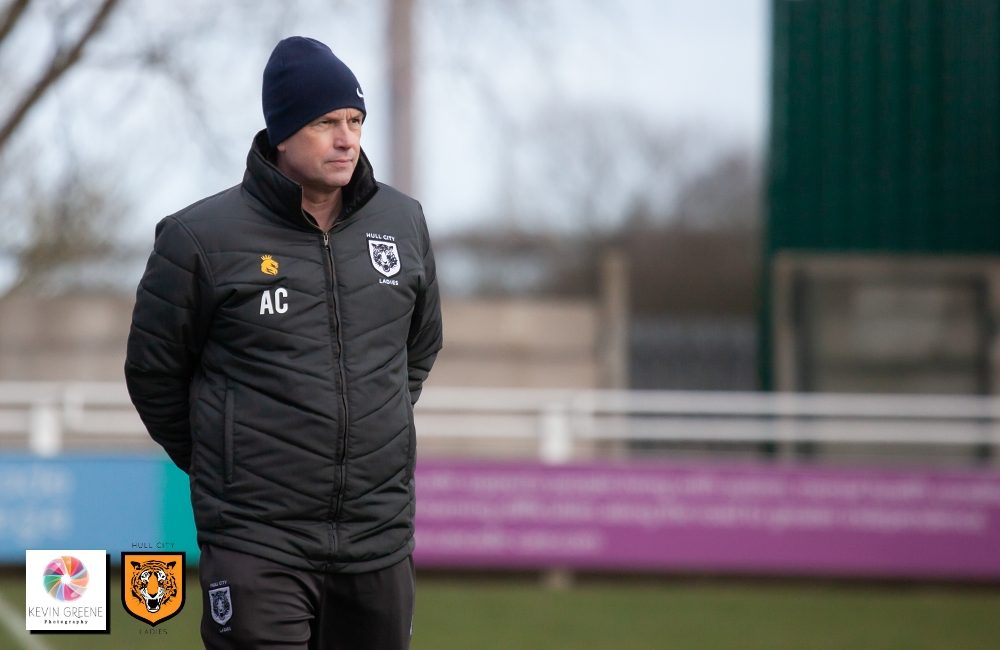 After Hull City Ladies 4-0 loss to top of the league Sunderland Ladies, Head Coach Adi Costello was pleased with his player’s efforts against a side who are unbeaten in the Women’s National League this year. “You look at the effort those girls gave today, it was incredible.

They are top of the league and only lost 1-0 to Birmingham who are a WSL team, in the cup. We more than matched them for 80 minutes. We played really well and I’m proud of the girls,” said Costello.

After Sunderland beat Hull City Ladies 9-1 last time out, there was a much-improved performance this time around according to Costello. “If you looked how we played in the last game when we got beat 9-1 away, we’re a completely a different team now, we pressed them in making mistakes, we’ve not had a game since the 26th January, we’re not match fit and struggled towards the end but I was really proud of the girls today, really proud,” said Costello.

Sunderland who are six points ahead of Derby and have two games in hand secured a 4-0 victory over The Tigresses but were made to battle for the win. “I’ve just said to them in the dressing rooms that one of the staff from Sunderland just come up and said that was one of the hardest games they’ve played this year. All credit to them, nothing to do with me all credit to them.

Sunderland who was beaten 1-0 against Women Super League side Birmingham in the Women’s FA Cup took their chances well at The Dransfield Stadium. “Sunderland were clinical today, they had four clear cut chances and scored four goals. In the first half we had three chances and didn’t score one, that’s the difference, they are a clinical team, give them a chance and they will score,” said Costello.

Sunderland have scored 59 goals this year, but Hull City Ladies limited them to four goals, something which pleased Costello. “We didn’t take our opportunities, but I think we limited them to four chances, get our defensive shape right, we can then look to play forward. We got it right against Fylde, a lot of the game today we got it right, our defensive shape was good and they’re a quality unit, don’t take anything away from Sunderland, but I’ve got to be honest I thought we did really well.

We need to be more confident in front of goal, there were opportunities that we could have shot but instead, we pass it when we should have pulled the trigger but it’s all learning.”

Costello said: “I’ve just said to the girls, we should not have, on that performance and the performance against Fylde fear anybody, we should go there now, knowing and believing that we’re going to win, and I believe we’ll win, I think we’ll go to West Brom, with the belief we’ll win, the application will carry us through, we’ve just got to work hard like we did today, work hard anything can happen”.