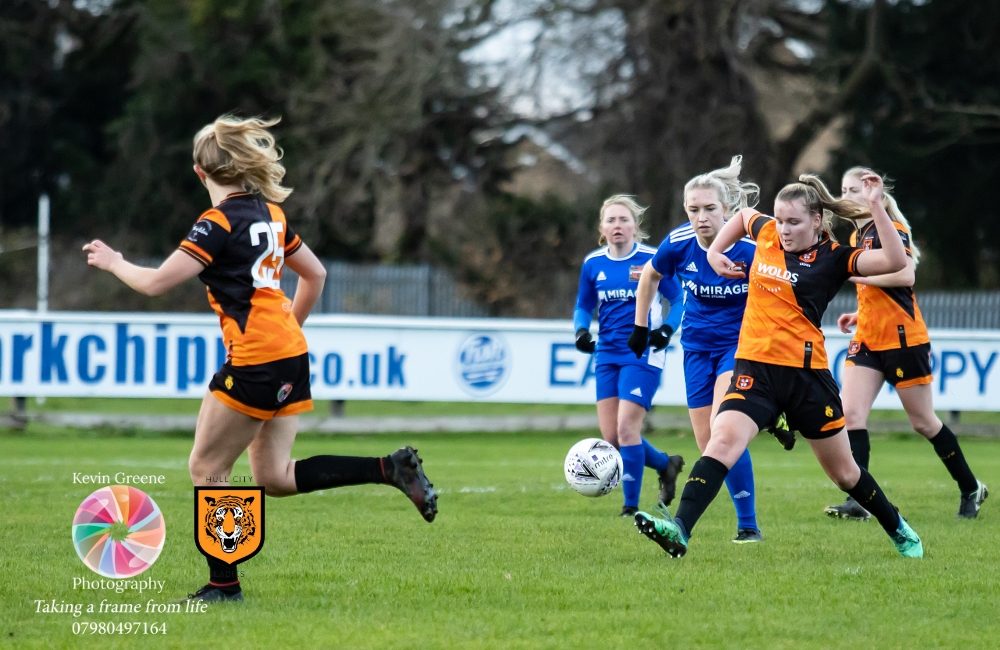 Hull City Ladies were beaten 1-3 against Sheffield Women at Haworth Park, on the last game of 2020.

It wasn’t the performance and result the Tigresses were looking for or wanted, but we go again next year and we look forward to improving on and off the field in 2021, in which we will also be celebrating our 20th year anniversary.

There are lot’s of things to get excited for in 2021, our new Girls Elite Academy, making a difference in the community with awareness days. We look forward to running school clubs, futsal sessions, and Easter camps when it’s safe to do so. We also look to strive on the field and hopefully we can still play in front of fans, as Haworth Park has been a safe place for fans to watch football.

Once again, we cannot thank everyone enough who has turned up to support us this year. We are thankful for our fans, key partners, and sponsors!

Rebecca Beach added to her fantastic tally of goals for the Tigresses, she is now on 166 goals in 185 appearances. But goals from Ashleigh Edwards, Hollie Housley, and Rebecca Knight clinched the three points for Sheffield.

It was 56 days since the Tigresses faced Nottingham Forrest away and 63 days since our last game at Haworth Park, but in the last game of 2020, Hull City Ladies suffered defeat against Sheffield.

Adi Costello said: “You could see in the first half we was very rusty, we haven’t played since October Forest, all them moons ago, it clearly showed. You can train as much as you want, you need to play games. After the Forest game we had COVID, lockdown, then a game called off last week for waterlogged pitch, it’s not ideal.”

The Tigresses had the game’s opening chance. A cross/shot from Katie Thompson hit the top of the crossbar and went behind for a goal kick.

The visitors scored the opening goal of the afternoon in the 15th minute. Brooke Marsden broke down the right-hand side, and she squared the ball across goal and Edwards’s simple header broke the deadlock.

Sheffield doubled their lead 12 minutes later from the penalty spot. Knight was tripped in the box and the referee had no choice to award a penalty. Housley stepped up and made no mistake as she fired her penalty high into the net.

Hull City Ladies nearly got back into the match from a fantastic free-kick set play. A free-kick was whipped into the box and was contested for by Ellie Tanser and Suey Smith but somehow Sheffield cleared it.

Five minutes from half-time, Sheffield punished the Tigresses defence. Brooke Marsden floated a corner into the danger zone, a goalmouth scramble ensured and Knight nodded in from close range.

Hull City Ladies were very unfortunate not to score one minute from half time. It was a great play by City as Emma Westmorland and Thompson combined excellently before releasing Rebecca Beech. Beech then turned her marker inside and out and unleashed a shot towards goal but her effort was cleared off the line.

Abi Wallace made a brilliant save diving low to her right to keep out a goal-bound header and save her side from conceding a fourth on the hour mark. Harley Skinner hit a half volley from the edge of the box that is well-timed but was straight at the keeper.

The Tigresses pulled one back on the 71st minute through Rebecca Beech. Beech who was awarded player of the match was released through the middle and she produced an excellent shot which looped over the keeper and into the top right corner!

Five minutes from time it was a huge chance for HCL to set up a grand finale. It was good work, Thompson, down the right and produced a cross which was headed over the keeper by a defender and Rachael Ackroyd looked to stab it home at the back post but somehow it went over the bar.

We hope everyone has a good Christmas, a fantastic New Year & continues to be safe!

Although it’s not what we wanted, we must remember & adhere to government guidelines to keep ourselves & our loved ones safe!

Let’s celebrate our 20th year anniversary together in 2021 & further create opportunities for girls in the region to develop, empower & achieve.