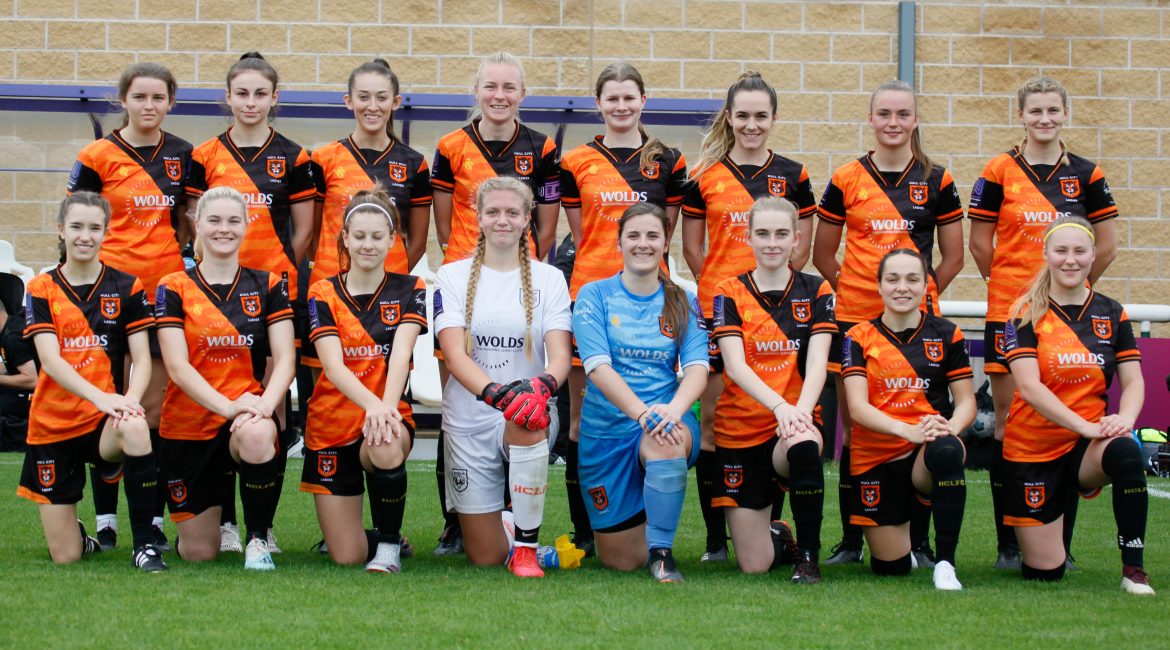 After clinching a good opening point last week against Loughborough Lighting, the Tigresses are aiming to secure all three points this Sunday at Haworth Park.

Hull City Ladies earned a good point away against Loughborough Lighting in the opening game of the season.

1st team manager Adi Costello said: “Those that know me are aware that I don’t make age a barrier.  If you are good enough regardless of age you play.”

The Tigresses went into the half-time break 0-1 after Liberty Bott scored a fantastic curler in the 36th minute.

Loughborough equalised in the 70th minute thanks to a great free-kick from their captain Chloe Young. Moments later it was brilliant play from Bott who found Smith with acres of space on the left. Smith’s shot treacled in to give Hull City Ladies the lead.

However, Loughborough equalised right at the death on the 94th minute to level the game and secured a point a piece for both teams.

“Loughborough we’re a good playing side and even though we conceded in the last few seconds of the game I was delighted with the performance and getting a result was an added bonus.

The players will disagree I guess as they feel they should have taken all 3 points draw away from home with a young squad was a good result,” Costello said.

Brighouse season was curtailed in March, but after a promotion application to the FA was approved, given they had the best points per game ratio in the FAWNL Division One North over the past two seasons, they were promoted to Tier 3 of the Fa Women’s National League.

In the opening game of the season Brighouse were narrowly beaten 3-2 against Derby County Women.

Derby scored the games opening goal as Brighouse equalised shortly after. Amy Woodruff made an excellent tackle, drove with the ball and played a ball into Danielle Whitham who’s strike rifled into the top right corner.

Town went into the half-time break ahead after Drew Greene scored in the bottom left corner shortly before half-time. Derby scored on the 76th minute and 79th minute to secure all three points.

The last outing between the two sides was Sunday 13th September 2020, as Hull City Ladies ended pre-season in defeat against Brighouse, with Rebecca Beach HCL’s only scorer, as the Tigresses tried another system once again in pre-season. Hull City Ladies found themselves one-nil down and equalised 20 minutes from time as Beech, who has scored 164 goals in 179 games, fired home, however, Brighouse sealed the win with a goal on the 88th minute.

Ones to watch at the Loughborough game was Liberty Bott and Emily Smith, as it turned out they both scored for the Tigresses.

The ones to watch this Sunday are Rachael Ackroyd and Jamey Brewster. It was a battling effort from Rachael last week as the striker worked well with Emily Smith chasing down every ball and holding the ball up well for her teammates. Jamey had a solid debut for the Tigresses, and she will want to continue the good work once again as Hull City Ladies lock horns with Brighouse.

“I am looking forward Sunday and my biggest welcome will be to our supporters who have been waiting almost 12 months to watch the ladies play.  Welcome make some noise and enjoy the experience,” said Costello.

Three club debuts were in the starting line-up on Sunday, as three came on to make their debut. Six 16-year-olds all on the field for the last 30 minutes.

Jamey Brewster, Ruby Dawson and Hannah Langford who played majority of the game with a broken/dislocated finger & suffered ligament damage, made their competitive debuts on Sunday. Lois Damms, Anna Bowman and Olivia Sellars all came on.