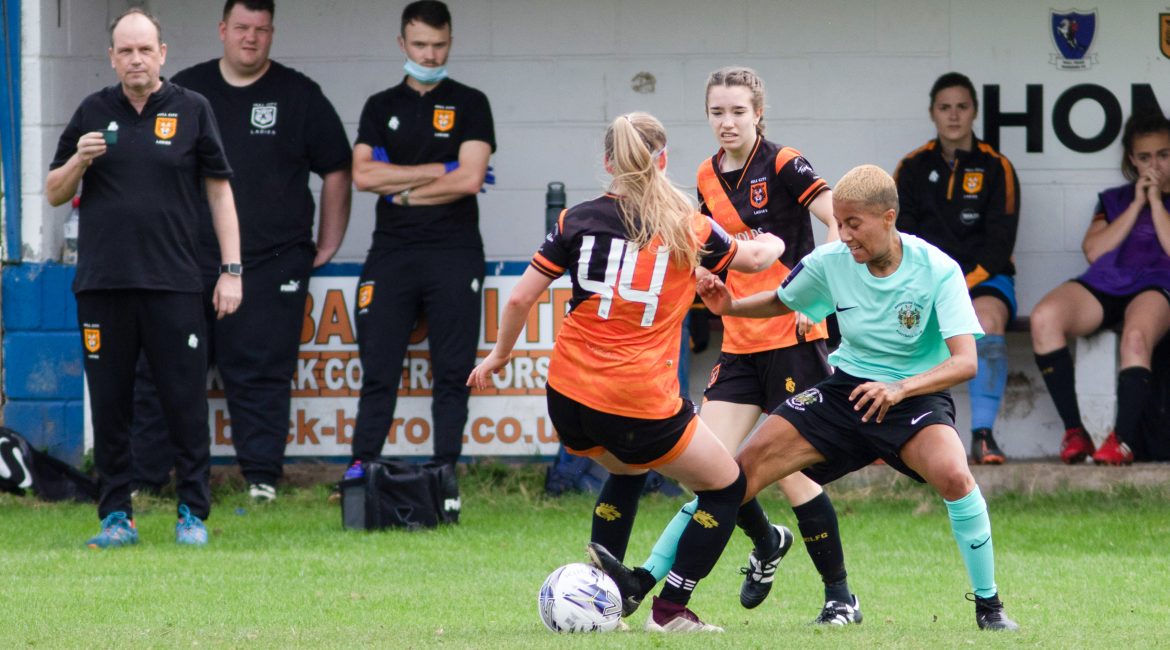 It was 236 days since the Tigresses last played at Haworth Park, and after picking up a hard fought draw against Loughborough Lighting last week, Hull City Ladies suffered a 1:5 defeat against Brighouse Town.

With six first teamers out and four making their league debut the Tigresses were beaten comprehensively but never gave up throughout the 90 minutes.

First team manager Adi Costello said: “It was difficult today, it didn’t help before the game started, the team against Loughborough, we had two players out with broken bones, one out with COVID, two away on holiday then just before kick off our only other regular centre half injures her back in warm up.

Six players out from last week, it became difficult, the back four didn’t play last week apart from young Tillie, it’s always going to be hard when you have so many players away with injury or holiday, but it’s one of those things.”

New signings Caroline Kilkenny and Amy Marras made their debuts against Brighouse. “Those 16 year olds who came in today found it difficult for the first 30 minutes because Brighouse ran them ragged. Alot of girls come from the RTC, this is a massive and I mean massive monumental step from RTC Under 16’s to Women’s football,” Costello said.

“Had to bring Caroline off to put Tanser in there but then we took a good ball playing out of midfield to play centre half. It was difficult but I’m not going to make excuses. Well done to Brighouse, they capitalised and played very well,” Costello added.

Eden Pedersen was the Tigresses latest injury as she came off within four minutes.

Costello said: “Eden injured herself in the warm up, she was having treatment hence the reason why we were all waiting, because Eden was still getting treated. Eden said she didn’t really want to play, I said give us 20 minutes and see how you get on. But she didn’t last 10 minutes.”

Ellie Tanser scored Hull City Ladies only goal, Ellie who was appointed as new club captain after the departure of Jo Symington, was also awarded player of the match. Costello expressed how the decision to make Ellie captain was an easy one and how delighted he is as Ellie leading the Tigresses this season.

“Ellie played absolutely outstanding against Loughborough and again today, It’s okay just being a captain and I’ve said this many times, captains make one big decision, heads or tails, that’s it. Leaders have 90 minutes of leadership and she’s a leader.

It’s alright wearing a captain armband, but she is a leader on and off the pitch. If you saw what she’s putting out on the group messages, motivating the girls, stay for a drink, team bonding, she is truly a leader. That’s what I want, I don’t want a captain, I want a leader and she is it.”

It was fantastic to see fans once again at Haworth Park, the support for Hull City Ladies is massively appreciated and does not go unnoticed by anyone at Hull City Ladies.

Costello said: “It was great and you could hear them, it was good to see not just parents, but our supporters too. 22nd December we last played here, closed doors, no bar facilities, no changing rooms and today you’ve got changing rooms, the bars open, everyone’s in the bar the opposition is staying. People in the stand, people behind the goals, Honestly brilliant.”

Megan Calvert, Sharla Cone, Olivia Sellars, Katie Thompson, Ellice Jackman and Olivia Dale all watched from the sidelines, something which Costello was pleased with.  “More importantly the girls who were not selected, came and watched and that’s important as its about team spirit.”

“Looking forward to the upcoming games, Wednesday is just a run out, it’s just for us to get some minutes in the girls legs and the girls who don’t get a lot of minutes, some minutes.

Back to Sunday, we’re hoping that we’ve got Hannah Langford back, Ruby still on holiday, Lib might be back, Olivia Sellars, then all of a sudden you’ve got players back. When Katie Thompson comes back, we’ve got her coming back, Ellice, Faith Martin. We need these players back to strengthen us. Meg Calvart is getting back fit, we’ll be completely a different side when they all come back off holiday and they’re all fit. Touch wood, and one out with COVID, the C word let’s get rid of that aswell,” Costello said.