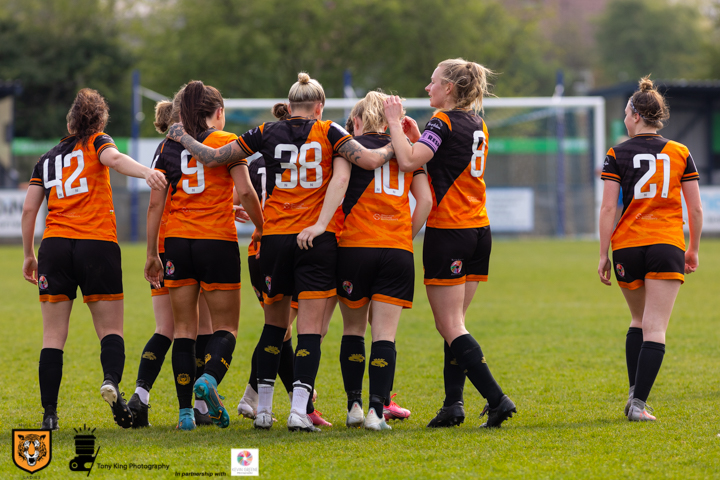 The Tigresses put in a hard fought performance against the team in pole position for the runners up spot.

The game began with Ellie Gilliatt (the league’s third highest goal scorer with 21 goals) having a chance on the left side of the City box in the second minute of the game. The shot lacked power and trickled wide of the posts. A slight warning of what was to come from Derby’s star player.

Despite the early warning, Gilliatt was handled by the Hull defence quite sufficiently. Amy Pollock and Louise Dealtry-Todd in midfield worked hard to allow the striker as little time as possible on the ball and, on the rare occasions she found some space, the back three of Tillie Oxley, Emily Driscoll and skipper Ellie Tanser made some strong tackles to deny Ellie of her 22nd goal of the season.

HCLFC had to soak up a lot of pressure in the opening quarter of the match. Derby played it to their quick and direct winger, Kira Rai, who had space to run at the Hull defence down the right wing. Her ability to change her approach made it difficult for the defence to predict where she would go and stop a chance from being created.

Due to City’s superb defensive shape, Derby struggled to create many clear cut chances. This resulted in a lot of long range efforts towards the Hull goal. These shots were hopeful at best and easily handled by Abi in goal.

The best chance of the half came to the Ewes in the 36th minute, a blocked clearance put the ball on a plate for an opener but the dangerous winger Rai’s shot drags agonisingly wide for Derby and the score remains 0-0.

HCL managed to create a few good opportunities to attack Derby’s goal though. Emily Smith drove at the Derby defence with intent later on in the first half and Racheal Ackroyd, who threatened the away side’s goal all afternoon, had our best chance of the half in the 40th minute as she capitalised on a Derby defender giving the ball away and ran through on the visitors’ goal.

The rest of the defence got back well though and she was forced to take the shot early, the chipped effort was caught comfortably by Derby keeper, Sarah Morgan.

This was the last clear-cut chance of the first 45. The Tigress’ support was confident in the team coming into the second half. It really felt like our resilience in the first half could be rewarded as the game opened up later on.

As expected, City came out with a more attacking mentality to the second half. Beginning with a good amount of possession and putting some impressive attacking moves together, especially down the wings. Ackroyd and Katie Thompson linked up well early, with the number ten playing a smart ball to the pacey winger, who drove into the box and put a ball across the goal. Derby’s keeper caught the ball comfortably, but the play down the right side seemed like a promising route to an opener in the first 5 minutes after half time.

Helen Lynskey also had some space down the right side of the Derby box soon after in the 50th minute. After some great trickery, she turned the defender and put in a chipped cross into the back post. Although the cross was strong enough to get over the keeper, no one in Black and Amber could quite reach it.

After this flurry of Hull attempts, the Ewes fought back and sent Gilliatt through on goal for her best opportunity of the game. Her side footed finish was stopped brilliantly by Abi, but Sophie Domingo was in the right place at the right time to pass the ball into an open goal to make it 1-0 after 54 minutes. An unlucky blow to City’s early dominant opening to the half.

The Tigresses didn’t stop putting pressure on the Derby defence and created another chance down the right side. Yet again Ackroyd played a great ball to Thompson down the right side. The winger, who had found herself free just outside the right side of the opponent’s box, chipped the ball delightfully over a helpless Sarah Morgan to equalise just two minutes after the opening goal.

City continued to press for a second, Rachael latched onto an over the top ball and flicked it over the defenders head. After this smart piece of skill, her ferocious shot was blocked at really close range by a Derby defender.

Hull looked the favourites to steal the points late on, but Sophie Domingo got on the end of a good through ball down the left side to stroke a shot into the bottom right corner to put Derby ahead for the second time on the afternoon. This goal would be the eventual decider of a great clash between two teams who defended well and were dangerous on the break.

HCLFC put in a great performance against a top team in the division. The defence barely put a foot wrong all afternoon and Abi made some really important saves to keep Hull into the game until the very last minute. The whole team put in a great collective performance that was almost topped off by some great individual skill by the wingers and both strikers. Something to build on coming into the penultimate game of the season away at Stoke.