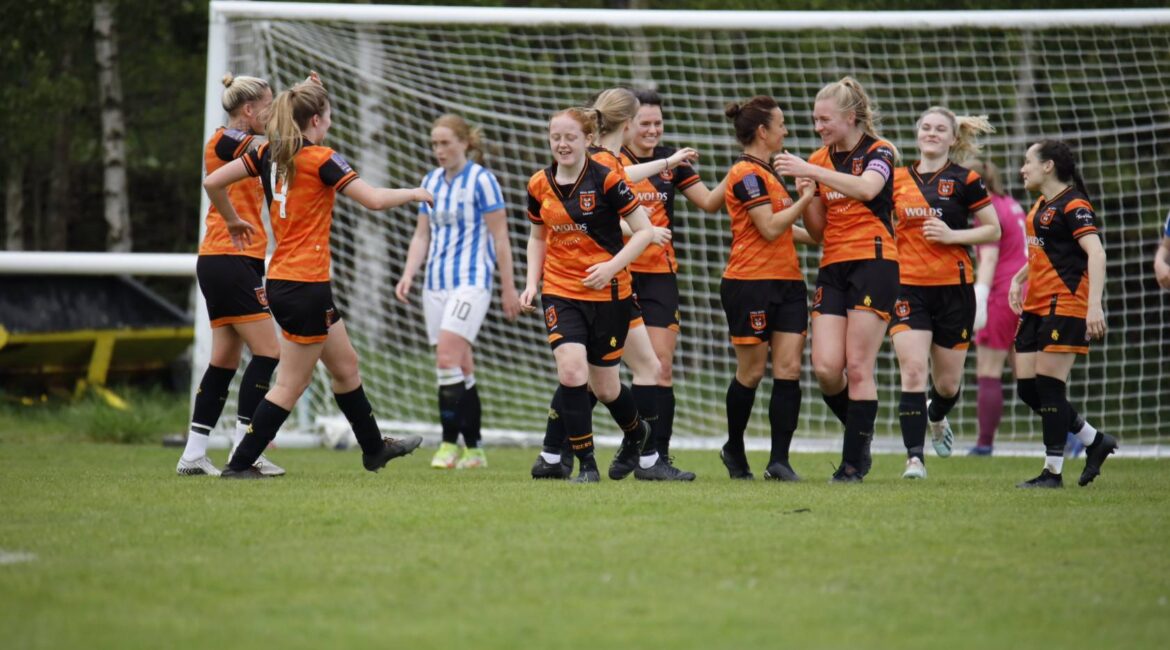 After a 5-0 home defeat against the Huddersfield last month, Adi Costello’s team really looked like they had a point to prove when visiting the Stafflex arena in the reverse fixture.

A result which means the Tigresses climb above Sheffield AFC in the table on the final day, Hull City Ladies put in an impressive and defensively resilient performance to beat a high scoring Huddersfield Town side 2-1 for the teams first away win of the season.

The game began with City soaking up a lot of Huddersfield pressure. A lot of the play was down Hull’s left side as Huddersfield winger Kate Mallin took on City left back Hannah Langford on multiple occasions, but was handled sufficiently by the full back. Huddersfield struggled to find any sort of space in front of goal after dominating the first ten minutes of play because of City’s solid back line and press.

It was our team’s press that created our first few chances of the game. Emily Smith was a constant nuisance to Huddersfield’s back three, who couldn’t handle the tenacity of the winger at times. She won back the ball quite a few times in the first half and found herself in acres of space on the left side of the home side’s final third.

Emily’s pressure was rewarded in the 15th minute when she took the ball off an unprepared HTFC defender and burst into the box with pace. After she was closed down by the opposition, the ball landed to Helen Lynskey about 25 yards out. She hit a brilliant curved effort into the top left corner of the goal. The ball dipped over Laura Carter’s head and just under the crossbar to give the lead to the underdogs against the Terriers.

It seemed like the tie had been levelled just a couple of minutes later, but the goal was disallowed for offside and play continued.

The game was very well fought between the two teams after the first goal and chances came for both sides. Katie Thompson, who was playing right back for HCLFC, made some great runs from deep and, most notably, played in a promising ball from the deep right side into Rachael Ackroyd at the back post, but the Huddersfield defender flicked the ball just away from the City number 10.

Huddersfield had one of their best chances to equalise in the game as Ria Montgomery went through on the Hull City goal in the 26th minute after a good ball from the midfield. The striker burst away from the Hull defence but a combination of good closing down from keeper Abi Wallace and a great recovery run from Thompson forced the striker into a mistake and kept the Tigresses ahead.

Our great defending inspired the team to go for a second and, after a great switch of play by skipper Ellie Tanser, Katie Thompson found herself in space down the right side yet again. Her cross was blocked by an opposition defender, but it resulted in a corner for the visitors. The ball was swung into the box and headed away to Helen Lynsky from 15 yards. The confident striker flicked the ball in front of her with her first touch and smashed the ball home on the volley with the second in the 28th minute to give HCL a vital cushion for an unlikely away win.

The 2-0 scoreline was short lived though. With Huddersfield’s top scorer, Laura Elford, adding another to her impressive goal tally to make it 23 goals for the season just a minute or so after Lynskey’s second of the game. It was apparent that Hull would have to dig deep for the remaining two thirds of the game to take all three points home.

Huddersfield had a few more chances before the half ended. Montgomery attempted to level the score with a low effort from the right side of the box in the 42nd minute but it dragged just wide and Wallace was forced into a save at her near post just before half time. Huddersfield still didn’t have any clear cut chances as the Hull defence remained sturdy against their pressure.

The second half kicked off and Hull were immediately under a lot of pressure from the home side. Crosses came in from winger Serena Fletcher, who was very good at creating space down the left side, but most of them were headed away by Tanser, who was brilliant at leading the back line when they had to dig deep and put bodies on the line.

Another good chance Huddersfield found was when Fletcher pushed Tillie Oxley off the ball in the City half and ran through on goal. The winger looked destined to score in the 65th minute but Wallace, who was also outstanding (especially in the second half), made a great safe low at her near post when the attacker took a curving shot.

Chances came thick and fast for a couple minutes after that. Including a goalmouth scramble that could have easily resulted in the equaliser. City found a way out, which seemed like the story of the half at times. Not to say they got lucky, Hull put body’s behind the ball and showed great bravery and will to win the ball to prevent the home side from finding any real chance of scoring.

As the Huddersfield team tired, Hull took it as an opportunity to run the clock down and make sure of the sides first, and ultimately last, away win of the season. The last shot of the game was gathered up and laid upon by Wallace as the referee blew his whistle for full time.

Certainly a game of two halves, the first half being a really promising display of pressing and finishing from Emily and Helen respectively. The second half showed more of the sides defensive capabilities and will to win, something that has been needed throughout the season.

In conclusion, it was a great way to cap off the season and a promising show of what’s to come for the next, where the side showed more than enough to come straight back up.