England Women’s Football captain, Carol Thomas BEM will be granted the Honorary Freedom of the City this month.

Hull City Ladies was pleased to announce in 2019 that Carol Thomas was the Tigress first club ambassador.

The former England international women’s defender succeeded Sheila Parker as captain in 1976, holding that position until her retirement in 1985.

In her time as captain she set some exceptional milestones; she became the first England captain to surpass 50 caps and also captained her side to their inaugural trophy. A success in the home International tournament against Wales and Scotland. Carol also became the first women qualified coach. Carol remained the longest, continuous serving captain for a period of 26 years before being overtaken by Faye White in 2011.

Carol will be presented with the Honorary Freemen scroll by The Lord Mayor of Hull, Councillor Christine Randall, in the Council Chamber on Thursday 19 January.

Lord Mayor, Councillor Christine Randall, said: “The title of Honorary Freeman of the City is the highest honour the council can bestow and Carol is the perfect recipient.

“Her contribution to women’s football has undoubtedly had an impact on the growing game we see today and it is only fitting we recognise such incredible home-grown talent.”

Carol Thomas BEM said: ” I am so proud and honoured to become an Honorary Freeman of the City of Hull,  my home city.  This award means so much to me as it is from the people of Hull and I will continue to represent and promote my home city with pride.”

The ceremony will be available to view via the council’s live webcast at 3pm, Thursday 19 January.

An inspiration to the Tigresses, female players & everyone in Hull! 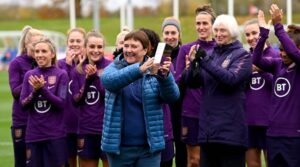